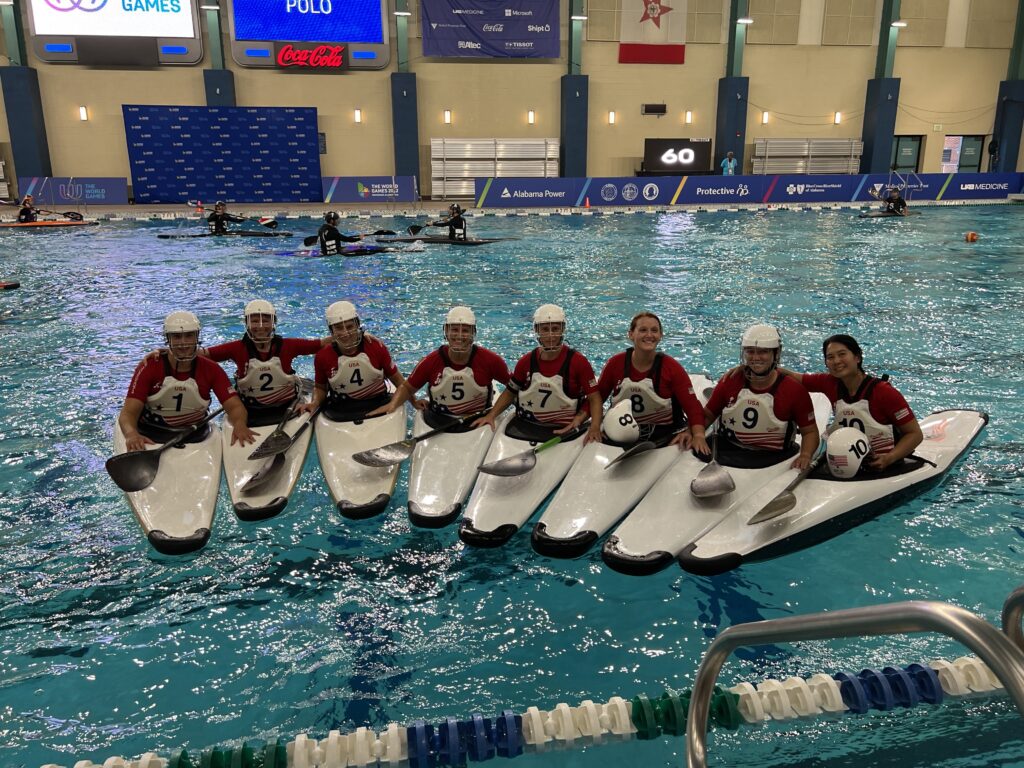 The 2022 World Games took place July 7-17 in Birmingham, Alabama. The games are an international, multisport event organized with the support of the International Olympic Committee. This event takes place every four years and provides a stage for athletes to compete at the highest level of their sport. This year was the first time the United States had both the Men’s and Women’s Canoe Polo Teams qualify to compete in the World Games, a huge accomplishment. Canoe Polo is an exciting sport that takes the technical skills of paddling and combines them with the excitement of traditional water polo.

The ACA had the privilege to speak with Olly Gotel, Level 4: Whitewater Kayaking instructor and a member of the United States Women’s National Canoe Polo Team. When she is not in the pool, you can often find Olly teaching and paddling on the Deerfield River in Massachusetts and on the Youghiogheny in West Virginia. Olly loves to compete in Canoe Polo because it features the rare combination of paddling and teamwork associated with ball sports. She told us what a privilege it was to compete and how proud she was of her team for fighting hard from start to finish of every game they played. “It was a fantastic opportunity, equally inspiring and overwhelming.” said Olly reflecting on the stout competition the United States teams faced in Birmingham.

Europe tends to dominate Canoe Polo competitions. The United States faces obstacles like having only a handful of clubs scattered throughout the country. Athletes on the Women’s National Team live in all parts of the country from the east coast to the west coast, making training together especially difficult. Through their passion, athleticism, and a few annual training camps, these women were able to qualify for the World Games and hold their own against the best teams in the world. The team celebrated victories like winning a sprint at the start of a game, blocking tricky goals, winning some steals, and scoring points against teams who are the best of the best and are able to train together year-round.

The annual Canoe Polo World Championships are fast approaching this August from the 16 – 21 in Saint Omer, France. Olly told us about how difficult it is to travel for training camps and for competitions. Many of us can relate to the difficulty of traveling with paddling equipment. Airlines are rarely accommodating of flying with boats and the cost is extraordinary. If you are able, please donate to the Women’s Canoe Polo team as they travel to France to represent the United States in the 2022 Canoe Polo World Championships. To contribute to the expenses of these extraordinary athletes, click here.