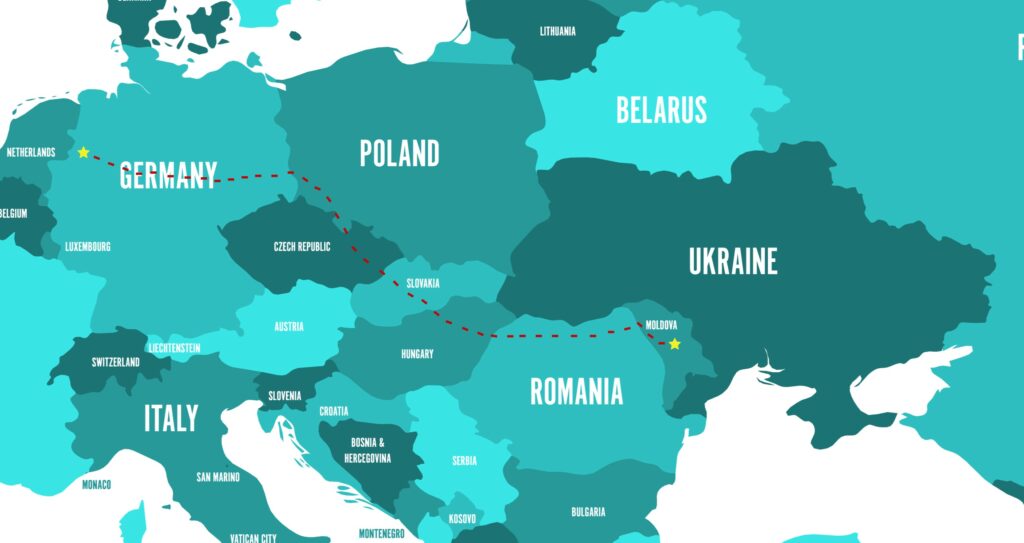 Ian Ross is best known as a sprint canoe athlete who has competed in World Cups and World Championships. Those who know him better think of him as a modern-day cowboy who will do whatever it takes to help people in need. While at a training camp in Germany, Ian received a text from a paddling friend, Anatoli Yarshow, asking if he could help find transportation for his family friends who had escaped bombings in Odessa, Ukraine. The trip would take Ian on a life-changing journey from his training camp in Germany to Moldova and back.

Right away, Ian reached out to all his friends in the area, hoping someone would be able to help him acquire a van to shuttle eight people out of Ukraine. Unfortunately, most of his friends had already left for other training camps and were unable to help. Without access to Wi-Fi where he was living, Ian spent his evening in a grocery store where he would be able keep in contact with Anatoli and his other friends. After hours without any luck securing a van, Ian returned home frustrated, but no less determined.

When Ian awoke the following morning, he went down to the boathouse for his first training session of the day. As his phone reconnected to the boathouse Wi-Fi, he received a text from his close friend and four-time Olympic gold medalist, Sebastian Brendel. Sebastian was able to provide him with the phone number of Anton Winkleman, a German paddler whose family had access to a van. Anton was at a training camp in Turkey at the time but was able to coordinate with Ian the logistics of trip between training sessions.

This transport would be no small feat, involving traveling twenty-three hours each way through Poland, the Czech Republic, Slovakia, Hungary, Romania, and then finally across a sixth border into Moldova. Anton was able to secure a van for Ian to use but insisted that he find a back-up driver to help break up the hours spent behind the wheel. After much persuasion, Ian was able to talk Jan Vandrey, another sprint canoe Olympic champion, into accompanying him to Moldova.

Ian and Jan met Anton’s family at their farm that same night. After successfully obtaining the van and a full tank of gas, Ian was ready to begin their twenty-three-hour drive. Jan, however, was the voice of reason, and said that they must wait until the morning as Ian had already trained four times that day and was in no condition to be driving a van through the night. Not happy, but conceding that Jan was right and that starting their trip exhausted was unsafe, they waited until morning.

As the sun came up, Jan and Ian hit the road. Stopping only for gas, they drove as quickly as they could to reach the eight Ukrainians who were waiting for them to take them to safety. They drove through rugged Transylvania Mountains with only the moon to light their way. They passed people riding bicycles in the middle of the night wearing only jeans and t-shirts despite the frigid temperatures, fleeing Ukraine into Romania.

Ian’s former canoe coach, Claudiu Ciur lives in Romania with his family. Thinking they might need a place to spend the night on their way back to Germany, Ian reached out to Claudiu to see if they would be able to stay a night at his home. Claudiu said that they were more than welcome to stay and warned them that it might be very difficult for them to get into Moldova as American and German citizens. With this information, Ian called Anatoli who was able to connect him with Greg Montella, the director and founder of Heroes International, a charity that works to provide relief to Ukrainians whose lives have been dramatically impacted by the war. Greg was able to provide Ian and Jan with a letter of intent written in Ukrainian, Russian, and Romanian, the languages spoken in Moldova.

As they reached the border of Moldova, they were accosted by armed customs agents. Ian managed to convince the customs agents to let them through as they would only be in Moldova for a few hours to rescue the Ukrainian family of eight who had escaped the bombings in Odessa.

Driving through the barren countryside, Ian reflected that this was the coldest place he had ever been. On what could barely be considered a road, Ian and Jan were incredibly thankful that Google Maps was able to navigate them to the camp where the family was staying. When they exited the car, they found they could hardly breathe for the cold. Ian was reminded of Montreal in the middle of winter. The first person they met at the camp was a woman wearing sandles, a thin sweater, and sweatpants. She was carrying two bags of laundry, and despite not speaking English, helped them find the camp manager.

While the camp manager brought Ian and Jan to the people they had come to pick up, he told them how the camp was set to hold 150 people but was currently housing 417. The people staying at the camp were sleeping in small rooms with three sets of bunk beds and ate primarily soup and bread due to the lack of resources available to the camp. The camp manager helped Ian and Jan find some food, and then they began their journey back to Germany, adding eight passengers to the van: a twelve-year-old girl, a five-year-old girl, and two-year-old boy, a grandmother, three mothers, and a man with cleft feet, which prevented him from staying and fighting. Knowing how many Ukrainians needed assistance in the camp, and only being able to help eight, was one of the hardest things Ian ever had to do. Part of Ian wanted to walk back to Germany, preferring to give his seat to another person displaced by war.

They stopped more frequently with ten people needing to use the bathroom and having to feed the children more often. They soon saw many cars and busses with Ukranian and Moldavian license plates heading west. Around midnight they reached the border from Romania to Hungry. Pulling into a substantial line of cars waiting to cross the border, they counted themselves lucky that they didn’t have to wait in the line of buses that stretched eight kilometers long.

The scene that Ian witnessed at the border was one of startling desperation. The consequences this war is having on the lives of the citizens of Ukraine is almost too severe to comprehend. The last few hours of the drive into Germany were extremely difficult. Jan and Ian were exhausted, not even all the energy drinks in Europe would be able to help. They pushed on, all the way from the middle of Moldova to Potsdam, Germany, where they were able to take a train to Wuppertal where their families were waiting for them. Jan and Ian said their goodbyes and wished the families good luck in their new beginning.

It seems surreal that this rescue was made possible through connections formed almost entirely within the paddling community. It can be easy to take for granted the impact paddling has on our lives off the water. Spanning multiple countries, Ian was able to rely on his paddling friends to help make a real and positive impact on the lives of eight people whose lives were devastated by the ongoing war in Ukraine. As Ian returns to training, he hopes to impress upon people how much work still needs to be done. Millions have been displaced by the war and more people continue to flee Ukraine every day. If you are hoping to help, Ian recommends donating to Hero’s International or another relief fund. A little money can go a long way in securing food, clothes, fuel for vans, and medical supplies that are desperately needed.

Congratulations to the New Atlantic Division Board Members

Congratulations to the New Atlantic Division Board Members
We use cookies on our website to give you the most relevant experience by remembering your preferences and repeat visits. By clicking “Accept”, you consent to the use of ALL the cookies. In case of sale of your personal information, you may opt out by using the link Do not sell my personal information.
Cookie settingsACCEPT
Privacy & Cookies Policy