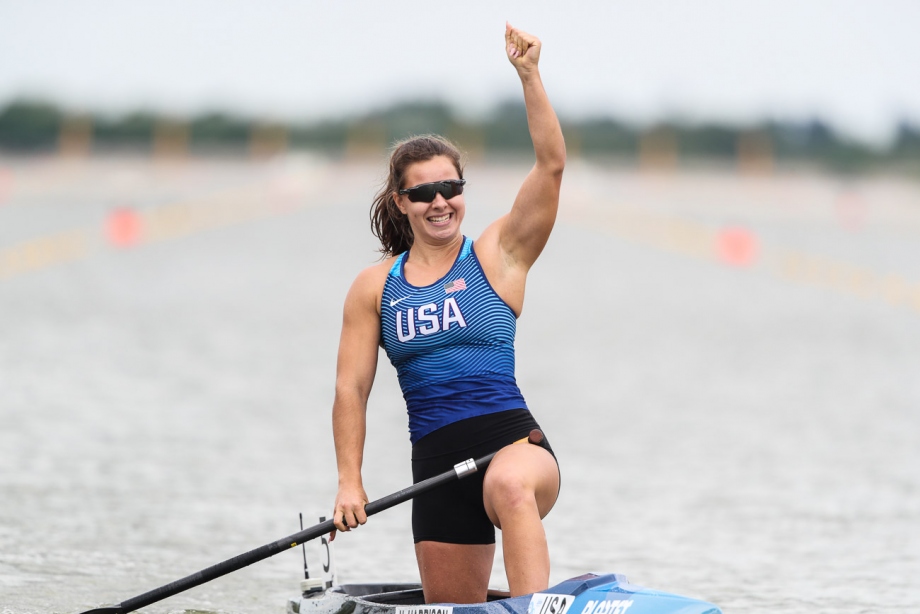 The U.S. Sprint and Paracanoe teams made their mark in Szeged, Hungary, this week, proving their stamina and competitiveness on the international stage ahead of the Tokyo Olympic Games.

A special congratulations goes out to Paralympian (Steve) Blake Haxton, who qualified by name for Tokyo in the men’s VL 200m, and who will be competing in two sports (paracanoe and rowing) at the Games this summer. Additionally, 18-year-old sprint star Nevin Harrison, who punched her ticket to the Olympics in March at U.S. Team Trials, won the C-1 200m race in Szeged.

The U.S. team performed well overall, with many boats progressing to the semifinal round in their respective events.

In the men’s sprint, the MK-1 5000m Final A featured Nathan Humberston, who finished 20th in Final A. The MK-1 1000m featured Alexander Lee, who finished sixth in his heat, in addition to an eighth-place finish in Final B of the MK-2 1000m with partner Owen Farley-Klacik. Nathan Humberston finished ninth in the semifinals of the MK-1 1000m before advancing to Final C. In the MK-1 200m, Stanton Collins finished sixth in his heat. Kenneth Kasperbauer finished 9th in the semifinals of the MC-1 500m and fifth in Final A of the mixed C-2 200m with partner Nevin Harrison.

In the women’s sprint, Shaye Hatchette finished seventh in her WK-1 200m heat and seventh in the semifinals of the WK-2 500m with partner Kaitlyn McElroy. This World Cup is the first international event for Hatchette, a winner of the Next Olympic Hopeful in August of 2018, and a native of Oklahoma City, who now trains with Zsolt Szadovszki in Gainesville, Georgia. McElroy also competed in the K-1 500m, finishing seventh in her heat. In women’s canoe, Lydia Sampson and Azusa Murphy finished ninth in Final B of the WC-2 500m event and fifth in the semifinal in the WC-2 200m. Lydia Sampson also competed in Final A of the WC-1 5000m event.

In paracanoe, the U.S. team secured Olympic men and women quotas in the VL2 event. (Steve) Blake Haxton finished an excellent fourth in Final A of the VL1 men 200m event to earn the Olympic quota, missing the podium by just 0.25 seconds. After the quota reallocation process by the International Canoe Federation (ICF), Kaitlyn Verfuerth secured a ticket to Tokyo based on her result in VL1 women 200m at the 2019 ICF World Championships, pending the USPOC’s approval. Additionally, Michael Ballard finished eighth in Final B of the KL2 men 200m, and Jamey Parks finished sixth in Final B of the VL3 men 200m. Erica Davis finished ninth in Final A of the KL1 women 200m, missing a quota by one place.

Despite coronavirus setbacks and a year of modified competition, the U.S. team had a successful showing in Szeged ahead of the postponed Tokyo Games season.

May 14th was a memorable day for U.S. Paracanoe at the Final Paralympic Qualifier in Szeged, Hungary, as (Steve) Blake Haxton secured a quota spot for Tokyo with his fourth-place finish in the men’s VL2 200m. To earn this qualification, he had to paddle faster than at least one of the three eligible athletes in the final – instead, he beat all of them.

Haxton earned the Paralympic quota spot by name and will represent the United States on the biggest international stage this summer in not one but two sports, pending the USPOC’s approval. The Ohio native is also a member of the U.S. Paralympic Rowing Team and was named to the Paralympic team in the men’s single sculls event at the U.S. Team Trials in April. For Haxton, the opportunity to compete at the Tokyo Games in a second sport seems surreal since he initially aimed to qualify in paracanoe for the 2024 Paris Games. However, with the Paralympic postponement last summer, he used the extra year to get in the extra repetitions he needed to be competitive at the international level.

“I’m surprised. I’m still in the early part of my learning curve in the canoe, so I didn’t expect to qualify until 2024. But with the extra year, the summer of 2020 was when things started to click for me, and I got more time in the boat.”

Despite his lack of experience in the canoe, Haxton feels that rowing has had a huge impact on his successful transition.“They are very different sports, but there are a few key fundamentals that definitely carry over like balancing in the boat, understanding what a good catch feels like, and having a high fitness level. Having the endurance from a 2,000-meter race in rowing before jumping into a 200-meter race in the canoe is very helpful.”

With the help of his rowing coach, Pat Kington, who also coaches him in the canoe, Haxton feels that the addition and transition between the sports has been relatively easy. Haxton also credits Deborah Page, U.S. Paracanoe Committee Chair, and athletes on the U.S. canoe sprint team with being a helpful resource in teaching him the finer details on how to improve. “The able-bodied C-1 racers have been incredibly helpful over the past year, whether I’m at their training camp or just listening to them talk about different parts of the stroke. I also seek out other athletes with a similar injury to my own and watch tape. Pat is great at that – he’s good at being creative.”

Page thinks Haxton’s performance in Szeged will do more long term than just punch a ticket to Tokyo and will catch the eye of other para-athletes. “When you have talented athletes like Haxton in your stable, it will attract others to the sport, especially other para-athletes who will say, ‘let me check this out.’”

It is common for para-athletes to come from other sports to try their hand at a new skill. Many find that their athleticism takes them far while having new opportunities to compete on the national and international levels. Like Kington, Page attributes Haxton’s ongoing success to his intuitive nature on the water and his ability to remain calm in high-pressure situations. “He has very high potential. Blake has a massive amount of upper body strength and does not panic. He never starts chopping his stroke.”

Moving forward, Haxton says he is likely to give up rowing after the Tokyo Games due to classification standards but plans to stick with paracanoe. And so, the balancing game begins for Haxton, as he sets his sights on training and competing for two sports ahead of the Games this summer. Paralympic rowing competition will take place on August 27-29, a few days before the paracanoe competition, which begins on September 2.

Sprint sensation Nevin Harrison, who will be representing the U.S. in Tokyo this summer, won gold in the C-1 200m world cup race in Szeged, Hungary, yesterday at the same course where she became the first U.S world champion in canoe sprint in 2019. Same event, same place, just about two seconds faster.

Harrison took the lead by 0.29 seconds over the second-place finisher, Yarisleidis Cirilo Duboys of Cuba, followed by Liudmyla Luzan of Ukraine. This race provided precisely the kind of confidence-boosting opportunity she hoped to gain with the Tokyo Games quickly approaching. However, according to Harrison, the race also helps put things in perspective.

“It was a confidence boost but also a wake-up call. Just to know that other girls are improving, I really need to stay on my A-game. ”

Although Harrison pulled out the win, the 200-meter sprint race is always unpredictable; the victory depends on who can best execute his or her race plan and out-paddle the competition on that day.

In the days leading up to the final, Harrison sensed she was not feeling her best and decided to formulate a new strategy before heading into the final.

“For the semi, I wasn’t 100 percent. I guess the feedback wasn’t there, and I didn’t feel well connected. My coach [Zolt Szadovski] and I sat down and talked through how to get better and improve. In the final, it started coming together…”

Even on her off days, Harrison proactively takes charge of her race preparation and can pull out the win against the best competition – even against those athletes who have caused her trouble in the past. Looking ahead to the Tokyo Games in about two months, Harrison’s training will get more intense but exciting.

“The coming weeks will be a lot of fine-tuning and working off my base from the winter. I’m really strong physically, but in such a short race, it’s really a mental game.”

Harrison describes her upcoming practices to include a lot of one-on-one training and speed work. She will continue to train on Lake Lanier in Gainesville, Georgia, at the competition site of the 1996 Atlanta Olympic Games. According to Harrison, during this period, she will put her training to the test to see what she is truly capable of. The results thus far have been positive, and she hopes to continue this before hitting the biggest and most competitive world stage this summer in Japan.

“It’s hard to get faster in this short time leading up to Tokyo, but it will be the fine-tuning and small adjustments that will perfect my race plan moving forward… it feels really good to be at the top of the podium now.”