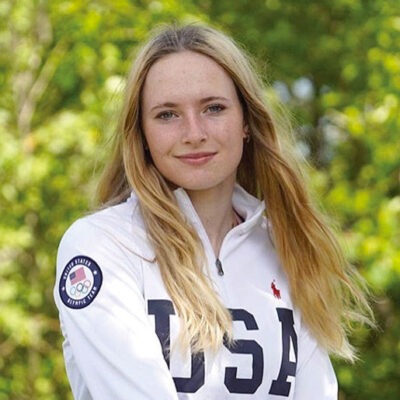 “To uncover your true potential, you must first find your own limits and then you have to have the courage to blow past them.” – Picabo Street

Evy got in her first kayak when she was four and hasn’t looked back since. Her father, a former National Team coach, began coaching Evy as she started racing. She joined the Nantahala Racing Club and paddled at the Nantahala River every day after school. A few years later, Evy decided to enroll in online school to allow her to start training formally. At age twelve, she travelled to Europe for the first time to race in the ECA Junior Cups and decided she wanted to race as part of the National Team one day.

Since she was little, Evy has dreamed of representing the U.S. in the Olympic Games. After her results at the 2019 World Championships and the 2021 U.S. Olympic Team trials, she is thrilled to be racing in the Tokyo 2020 Olympics in the WC1 and WK1 classes.

Evy enjoys almost anything outside and is always keen to try new sports like snowboarding and surfing. When travelling, she can be found exploring cities and finding new restaurants and cafes. At home, Evy loves spending her time painting and cooking delicious food.