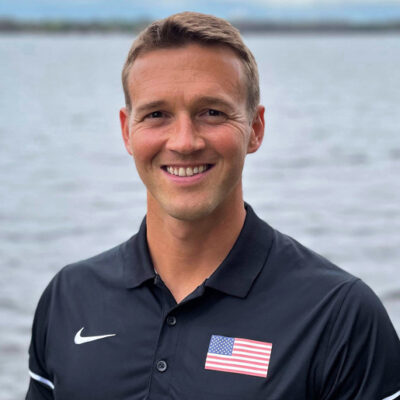 “It never gets easier, you just get faster”

Things You Didn't Know About Nathan

While Nate has long practiced sports in and on the water, he found his way to sprint kayaking rather late in life.  After a few years of surfski paddling, he only sat in his first sprint kayak at age 31.

While working full-time as a French teacher in Jacksonville, Florida, Nate trained mostly alone leading up to his first U.S. Team Trials in 2019. He narrowly secured a spot on the team, but after training with the group under coach Zsolt Szadovszki that summer he won the K1 1000m event at U.S. National Championships. At that year’s World Championships, he paddled stroke for the K4 1000m boat that broke under the 3-minute mark, a time achieved by only a few crews in the history of U.S. sprint kayak.

Beyond sprint kayaking, Nate is a huge fan of sport and play in the ocean. He loves swimming, surfing, rowing, paddleboard, and surfski – especially when the waves are up. His summers are usually spent as an ocean lifeguard, and the rest of the year he teaches French. While Nate appreciates any travel opportunity, he particularly appreciates visiting the numerous and diverse French-speaking corners of the world.