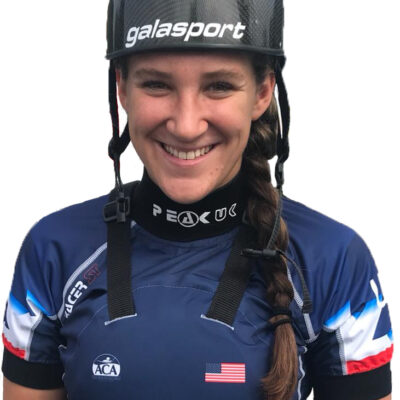 12 Things You Didn't Know About Ria

Ria began paddling with her parents at age 2, in a two-seat sea kayak, on lakes near her Auburn, California home, and during multi-day paddle/camping trips in the Sierras (Lake Eleanor being a favorite spot!). At age five, Ria got her first kayak, a tiny playboat. She spent the summer learning how to roll a kayak in the pool, and by age 6, she was a pro at hand- and paddle-rolling. Over the next couple of years, Ria continued to build her river running skills by paddling with her dad Rok (a renowned Class V+ whitewater paddler) on the South Fork of the American River near Coloma, California. Ria was introduced to slalom kayaking and racing by a fellow kayaker who invited the family to the yearly, family-friendly Mokelumne river slalom race near Jackson, California. By age 9, Ria was hooked on trying to make all the slalom gates.

With a great kayak-roll, Ria was ready for bigger adventures: a 3-day trip on the Rogue River in Oregon, and a 21-day trip on the Colorado River, in the Grand Canyon, Arizona. Ria was only seven years old when she ran the Rogue River. She enjoyed this class III river, the camping, the camaraderie of fellow kayakers and rafters. Ria even saw a baby bear on the shoreline and thought it would be fun to say hello before her father interrupted her approach. At age 11, Ria kayaked in a slalom boat 231 miles of the Grand Canyon of the Colorado River during a 21-day trip. She ran huge rapids, surfed waves, and became a confident paddler.

Ria watched her first-ever Canoe Slalom World Championship in Deep Creek, Maryland, when she was 11. She befriended a group of Slovenian athletes, two of whom became world champions a day later! Then and there, Ria wanted to be just like them. Her “formal” race training began impromptu a few days later when she accepted an invitation to train with the Potomac Whitewater Racing Club in Washington, D.C., for a couple of weeks, while her parents and sister flew home to California. Over the next few months, Ria continued to seek slalom training opportunities, which led her to join the U.S. Performance Academy (USPA), an online school for high-performing athletes, allowing flexibility with school, training, and racing. Starting at age 12 and for the next couple of years, Ria spent her summers in Slovenia, where she trained with the kayak club in Solkan and raced at European Canoe Association (ECA) races.

Ria tried out and made the USA Junior National Team in 2017, at age 14 – the first year she was eligible to participate in the Team trials. At age 15, Ria competed at the 2018 USA Canoe & Kayak Team trials and made the Junior and the Senior National Teams in the WK1 event. She raced for the USA Canoe & Kayak Team at several International Canoe Federation (ICF) World Cups and the 2018 World Championships in Rio de Janeiro, Brazil. Ria was the youngest competitor in Rio. Through these events, she gained invaluable experience and appreciation for the sport and various world cultures.

When not paddling, Ria enjoys the outdoors in other ways. She loves swimming, alpine skiing, and hiking/backpacking. Before becoming a canoe slalom athlete, Ria was ski racing for the Sugar Bowl Ski Team in California. She still loves to ski fast! At home, Ria loves experimenting with different cuisines, trying new recipes, and creating a few of her own. To relax, she enjoys listening to music and going on drives with friends.

We use cookies on our website to give you the most relevant experience by remembering your preferences and repeat visits. By clicking “Accept”, you consent to the use of ALL the cookies. In case of sale of your personal information, you may opt out by using the link Do not sell my personal information.
Cookie settingsACCEPT
Privacy & Cookies Policy